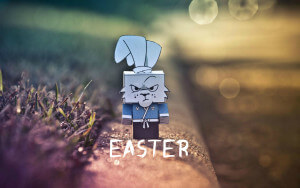 I still remember being the little fat kid spying out the play area during the Easter egg hunt, calculating my every move before going for the prize. When you’re little, Easter hunting is war and every other kid—girls included—is your enemy. When the race was on I’d run as fast as my chubby little legs could go, and when I saw an enemy collecting my prize I’d go all King Leonidas on them, shout “THIS IS SPARTA!” kick them in the chest, and grab the chocolates.

Okay, not really, but that would have been awesome. Easter is huge! It’s definitely one of the most important weekends of the year for those of us who follow Jesus, and to be honest it should be. It’s an occasion for us to celebrate the Resurrection—the victory of Jesus Christ over Satan, sin, and death. For us as South-Africans it’s finally something to celebrate after our semi-final loss against New-Zealand.

Crazy thing is, often well-meaning people who claim to follow Jesus turn Easter into a witch hunt, grab their pitch forks and wooden stakes, and hunt anyone who so much as looks at an Easter bunny. Safe to say they believe Easter is pagan.

The origins of Easter most likely stem from early Anglo-Saxon inhabitants of the British Isles during the first millennium who celebrated a spring festival in the month of April in honour of their goddess Easter, who represented fertility and the arrival of spring, light, and the rising dawn. When Christian missionaries first arrived in Britain from the Roman Empire during this time, they incorporated some of the pre-existing traditional festivities into the celebration of the Resurrection of Jesus Christ, which took place in the same season. Over the centuries, the celebration of Jesus’ Resurrection overtook Easter in popularity, though the name “Easter” stuck.

Should We Or Shouldn’t We?

As a Christian, should you celebrate Easter? Are you allowed to have a chocolate or will an egg send you to hell? Listen, if an egg or a fat, purple bunny, which poops multi-colour eggs can send us to hell, then we are worshipping a weakling,  a guy named Jesus, who’ll tap out when a bunny puts him in a chokehold in the octagon! And imagine being a bunny? Such a bummer. Now we know what’s on the menu in hell “hi my name is Luci, I’m your chef and on the menu for eternity is BUNNY….mwahahaha” (a joke).

As Christians we are to engage our culture. We are missionaries in whatever culture we find ourselves. We can’t accept everything as godly, but at the same time we can’t go and live on a mountain and exclude ourselves from the world. Jesus is our example. When it comes to cultural issues like this, let me suggest that as Christians we should view them through a simple principle of “receive, reject, or redeem”.

There are things in our culture that are part of God’s common grace to us, which we can simply receive. Our culture likes to braai. As a Christian I can “receive” this tradition without having to search for “Christian braai’s”. It’s not sinful to braai.

There are things in our culture which are sinful and not beneficial. One example is pornography, which has no redeeming value and must be rejected by us as Christians. Pornography and supporting Western Province (lol).

There are things in our culture that are not bad in or of themselves but can be used in a sinful manner and therefore need to be redeemed. Sex, for example, was made by God for pleasure and although many have sinned sexually or have been sinned against sexually, Jesus has redeemed this great gift in the context of marriage. It can be used to glorify Him.

The early missionaries to the British Isles decided to redeem Easter rather than reject it or simply receive it. As a result, it became one of the centres of Christianity for many centuries, and Easter the goddess was all but forgotten. Today, for many people in our culture, Easter is more synonymous with colourful fluffy bunnies, egg hunts, chocolates, and an awesome meal or braai with family and friends. If an Easter bunny is more powerful than Jesus, man then I’m following the wrong person.

Joy (my wife) and I choose to tell our daughter that the Easter Bunny isn’t real, that it’s a make-believe “pretend” story, but we have no objections to the fun and chocolates. As long as she knows that the Resurrection of Jesus is a historical fact and not a fanciful myth (and as long as she doesn’t exceed her sugar quota for the day) the fun of Easter can continue. We have fun, but we celebrate death and the resurrection of Jesus. Not bunnies. We enjoy Easter in its proper context.

As with many things, we redeem the idea of the Easter Bunny. We stress that Easter is a time for us to remember the death, burial, and resurrection of Jesus Christ. Easter is also a time to take pictures, have dad dress up as a bunny, and tackle him when he hands out the chocolates (he can’t swear ‘cause there are little kids in the room) AWESOME!

Let’s have fun and create memories for Jesus. Bunnies or going on Easter egg hunts are all about having fun and making good memories. And there’s nothing wrong with enjoying the festivities as long as they don’t overshadow Jesus. In fact, spending quality time with our families speaks to the Father heart of God.

Easter is this weekend.

One person has conquered death and is the saviour for any person who trusts in him.

Enjoy Easter, the egg hunt and remember to shout, “THIS IS SPARTA!”

If you are in Centurion, feel free to join us follow the link for more info